New four-cylinder petrol plug-in hybrid engines are the highlight of the revamped range of Range Rover Velar models, and they have been picking up plaudits from motoring journalists.

So what’s the fuss all about?

First, let’s explain how a plug-in hybrid electric vehicle (PHEV) works, since this kind of propulsion system accounted for half of all the electrically-powered cars currently on the UK’s roads.

Rather than just having an electric engine, powered by a battery, a hybrid electric car has both a conventional petrol or diesel engine, and a smaller electric power plant, which start the car and help it accelerate up to low speeds with zero emissions, typically for up to 40 miles between charges, before the conventional engine takes over. 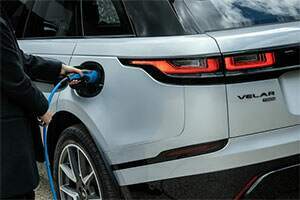 So a PHEV is particularly useful if your journeys include a lot of town or city driving, in stop-start traffic. Then, when you’re beyond the urban sprawl, the petrol engine takes over and powers the car as usual.

Even better, when they’re being powered by the battery, there are zero exhaust pipe emissions being created.

You just have to be extra aware when driving in this mode that some other road users might not hear you coming. So you need to be prepared for this, and drive a bit more defensively than you ordinarily would around town in particular.

A hybrid car’s battery is also charged by capturing some of the energy that a car produces when you step on the brakes. Normally, this energy escapes into the engine and then into the air as heat, but a hybrid car can capture that energy, and use it to top up the battery.

Take the long road - no worries

But the biggest benefit of a PHEV is that you don’t have that ‘range anxiety’ problem, of wondering whether you’ve got enough electrical power into the engine to get you where you’re going, because the two power plants switch between each other when the on-board computers sense which propulsion method is best for the driving conditions. And of course, you can drop into a petrol station and refuel when the tank starts to run low.

Because their electric engines give them decent acceleration from low speeds, and the combustion engine then takes over and does most of the work out on the open road, plug-in hybrid cars have steadily taken an increasing slice of the market.

However, you should also bear in mind that it’s a wise move to have a charging point installed at home so you can boost the electric engine’s power while the car isn’t being used.

Also, bear in mind that the only type of driving a PHEV doesn’t especially suit is regular long-distance runs. When they’re asked to constantly produce large amounts of power, a plug-in hybrid powertrain adds little to the efficiency of the engine; so you need to think whether you’re likely to regularly use the car beyond its stated electric-only range.

A typical tipping point for fuel efficiency is around 150 miles on a single trip, with the engine having started with a full electrical charge.

So if you hardly ever do this kind of distance in a single trip, you’ll almost certainly get better fuel economy than with a similar petrol or diesel car. And regular trips beyond this distance are likely to be more expensive in a PHEV.

Fit to wear the badge

But Car Dealer magazine recently ran the rule over the new Velar PHEV, and straight away, they’ll have upset a load of hardcore Land Rover fans, by saying that the car “looks fantastic for city life and has buckets of badge appeal”.

Then again, Land Rover/Range Rover long ago moved beyond its (undeserved) previous image as the preserve of farmers or, at the very least, the green welly brigade.

Nowadays, only a small proportion of Range Rover buyers will ever plunge their car into a muddy stream - or even head out to explore its handling along a lumpy, bumpy B-road. So the new Range Rover PHEV has to be judged alongside other vehicles now using similar propulsion - and the vehicle that instantly springs to mind is the Mitsubishi Outlander PHEV.

The Velar in particular is targeted squarely at drivers who want the perceived prestige that comes with owning a Range Rover, but who aren’t ever likely to drive it in a pair of wellies, much less step out of the car into a muddy field to tend to some sheep.

Auto Express’s reviewers reckon the real target market for the Velar will be the company car driver, for whom “(the) tax savings are still hugely worthwhile, running into the thousands compared with a similarly-priced petrol model and likely to be enough for a decent holiday for all the family each year”.

A benefit-in-kind tax rating of just 11 per cent, as against the 37 per cent for a purely petrol-powered Range Rover is likely to be very appealing to quite a few drivers who get to choose their own company car.

There are likely to be other aspects of the Velar hybrid which will swing the decisions of many more potential buyers, not least the serious amounts of power produced by its electric engine, which will push it to 62mph (100kmh) from rest in 5.1 seconds, making it comfortably the quickest Velar off the start line (or away from the traffic lights).

Then we come to the pioneering feature in this car. Land Rover has fitted microphones that monitor external noises, and allow a signal to be played through the speakers that will cancel out the noises from under the bonnet. As a result, you get plenty of oomph without lots of the accompanying engine sounds.

The reviewers claimed that the Velar hybrid’s battery will reach 80% of full charge in an hour and 40 minutes using a bog-standard 7kW AC home charger, or will get the same amount of juice from a commercial 32kW DC rapid charger in just 30 minutes.

Should you be tempted to take the Velar off the asphalt and into something a bit less solid underfoot, as Auto Express’s test team found: “Even on the coil springs of our car rather than air suspension, there’s more off-roading ability than you’ll ever need,” they said.

The boot is about one-sixth smaller than in a fully combustion-engined Velar because of the need to accommodate the battery pack, but as the same review pointed out, there’ll still be space for any canine travellers out back. The latest Velar has a host of tech too - it even lets you plug in and charge two smartphones at once, so no more squabbling over who needs the extra juice the most!

Auto Express concluded: “The Velar is more attractive than ever with plug-in hybrid power – and it was a pretty attractive proposition in the first place.”

Car Dealer Magazine’s reviewers were equally grabbed by the car, their verdict being: “The Velar is a fantastic all-rounder and feels like the sweet spot in the road-focused range. It is dripping in premium appeal, has a great interior and is fantastic to drive – on-road and off it”.

Finally - in case you take notice of such trivia - lots of journos also rate the Velar one of the best-looking SUVs on the market. “It’s big, but it’s not intimidating, with the lower bumper and side skirt designs make it look hunkered lower to the ground than a typical SUV … while round the back there’s a black bar that does a great job of breaking up the large surface”, commented the same reviewer.

And if much of this seems like trivia to you, just focus on one figure - 130mpg. That’s the quoted overall MPG for this car from the official data. That alone is likely to seal the deal for quite a few buyers.

If you’ve got a Velar on your ‘wanted’ list, but for the time being are running around in a somewhat older Range Rover, don’t forget that at LR Parts, we can fix you up with any of the bits you need. Just browse through our site to search for the items on your shopping list, and we’ll happily help you out.